Biography
(and other miscellania) 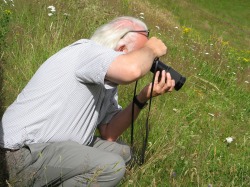 Born in Wigan on St.Swithins Day in 1945, Godfrey attended Beech Hill Primary School and Wigan Grammar School. His parents were Robert Curry Talbot, an ex-professional footballer and Florence Esther Talbot.  A long period of illness immediately after leaving school prevented Godfrey from going on to University and he worked in a various jobs, but after being talent spotted in a Liverpool Folk Club, embarked  in 1973 on a career in local government as a Junior Assistant in the Arts and Leisure Department of Wigan Metro. Although poetry and music were his major interests some of his earliest paintings date from these years in the late 60's.

The Wigan Metro (Metropolitan Borough) had opened the new Turnpike Gallery and Library in Leigh in 1971 and in 1973 Godfrey found himself, usually single-handedly, organising and building exhibitions of art and sculpture with some of the best of the contemporary artists in the UK. Largely due to his efforts, the Turnpike rapidly established a reputation across the UK for the quality and scope of its exhibitions and the artists shown there.

The job gave Godfrey priveleged access to the works of many great artists, and personal contact with the artists themselves. L.S.Lowry, Henry Moore, Eduardo Paollozi, Ian Hamilton-Finlay, Howard (now Sir Howard) Hodgkin, Bridgit Riley and many others, including Wigan based painters Theodore Major and Lawrence Isherwood, from whom he was able to purchase works for the Turnpike, could be fairly said to be his early influences. Having supported Major with an exhibition and in other ways, he later fell out with him over a misplaced candlewick bedspread, but then everyone fell out with Major over something or other.

Godfrey completed very few of his own paintings  during his years at the Turnpike, concentrating his creative work largely on his first love, poetry, only taking up his brushes again in the '90s after an especially difficult period which included the death of his mother, a long illness, depression, and being evicted from the family home by a vindictive landlord. Although his paintings are far fewer in number than any of his contempories, Lowry, Isherwood, and Major and his major works were produced later, nevertheless he should be included amongst this small select group of significant Northern Artists, knowing all three of them, and sharing many of their trenchant  and very individual views of life and art in the North West of England in the same period.

Thus the artists which have particularly influenced his own painting were not remote subjects of academic study, but were individuals who recognised in this lowly Metro minion,  someone who they could trust and communicate with.  Although Godfrey retired due to ill health in 1984, the Turnpike experience proved to be invaluable in developing his own art.

Taken together with the experience of  playing an active role through his poetry in the northern arts revolution of the '60s and performing alongside such well known names as Adrian Henry and Roger McGough, Godfrey can also reasonably claim to be someone whose art is forged, not in the esoteric world of the art salon or art school, but in the cold reality of a northern climate before artistic celebrity became a matter of dead sheep, felt covered pianos and dissected corpses.