Wigan is in the north western part of the UK, in what used to be the County of Lancashire, roughly half way between Liverpool and Manchester. It is an old mining and cotton based town which came to symbolise the industrial North of England, immortalised by George Orwell in his pre-world war II book, The Road to Wigan Pier, and by the comedian George Formby and famous more recently as the "home of Northern Soul". Until the property developers ruined it, it was a town of about 80,000 people, with its own distinct persona and architectural landscape. Now, frankly, it is a testament to the worst evils of fifty years of town and country planning, a traffic nightmare, with much of its old town centre (whose use dated back to Roman times) vandalised by monstrous shopping centre developments and late night drinking establishments. For more details look at some of the excellent  websites  such as Wigan World   .  The photograph below shows one such recent town centre development under which a Roman villa is now permanently buried. The caption on the massive poster which reads "Wigan's Exciting Shopping Experience" explains why. I suppose we should at least be grateful that they got the apostrophe in the right place. 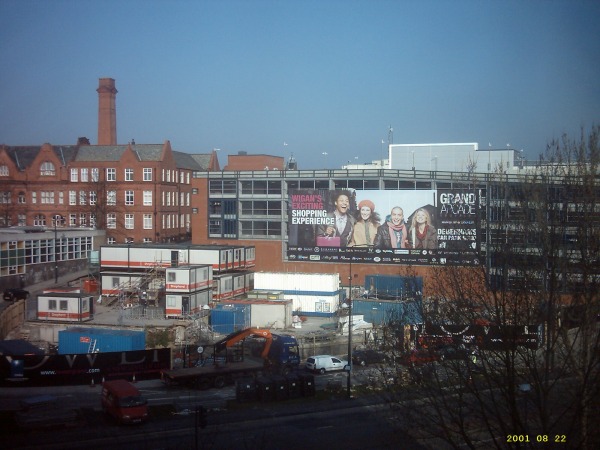 Where can we see more of Godfrey's paintings?

Unfortunately viewing opportunities are very restricted. There are some early works in private hands, but it is not known if any have as yet found their way into any gallery collections. Distribution has not been helped by Godfrey's considerable reluctance to part with work which he has been known to begin in one decade and finish in another.  Of the known works of various kinds, believed to be around two hundred in number, only some twenty to thirty are reliably traceable.  Possibly the best solution for the serious enquirer is to contact Godfrey through the contact page on this website.

Where can I read more of Godfrey's poetry?.

A small collection of his poetry entitled "Cardigans for Granny" was published in the early '90s but is sadly now out of print, as is his earlier "Fat Free Poetry". If there is sufficient interest then these could be re-published or produced in pdf format for e-book distribution.  Since his poetry began in the early '70s it is considerable and  "Cardigans" and "Fat Free" represent only a tiny fraction of his output.

What is the Trenchcoat League?

You may have noticed the reference to the Trenchcoat League on the Contact Page. The Trenchcoat League is a fictional (almost) and very humourous account of the adventures a group of friends and acquaintances as they stagger through the years to senility or better. Written, and still being written by Godfrey since the mid-80's, largely biographical and hugely inventive,  Proustian is an adjective which barely begins to describe it, in fact it doesn't.  Massive would be better, life changeing, side-splitting, it is the antidote to virtually all diseases known to man.  The trenchcoat becomes the symbol of survival, as it was for those returning from the horrors of the trenches after WWI to the miseries of the General Strike and Depression.

Excluding some chapters which were stolen from a bus centre in Horwich, it is now so large that publication will need a publisher with only the largest of pockets and a sizeable fork-lift prepared to invest in the years of work it will need just to type it out.  Alternatively it will be recorded on something very small in incredibly compressed form and be used to inform visiting dignitaries from other planets of the ultimate ability of the human race to overcome any obstacle. A separate website is planned to elicit interest in the project from, frankly, anyone interested in joining and prepared to contribute to its publication. Membership is open to anyone who shares the aims and ethics of the Leaugue and can offer a unique contribution to their research activities. The photograph below shows a  founder member of the League, caught in a rare moment of movement between flying buttresses. 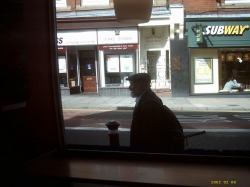 Is Godfrey a real person?

Yes. Incredible as it seems, he is. You couldn't invent him, or even re-invent him. Many attempts have tried and failed. One simply has to acknowledge it as a fact. There are those who wish he wasn't. but it is indisputable. He isn't famous, or even very well known, and the last thing he is, or would want to be is any kind of celebrity, but his story is a unique one and his painting, his poetry and his writing are a record of a unique individual with a very special insight into a fascinating period and place.